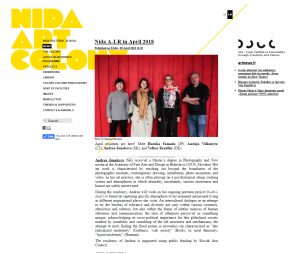 Artist in residence program in Nida Art Colony, Nida, Lithuania, selects few times a year 4-5 proffessional artists from all over the world who are invited for an individual artistic stay in Nida Art Colny studios.

Andrea Junekova (SK) received a master degree in Photography and New media at
Academy of Fine Arts and Design in Bratislava (2010), Slovakia. Her art work is characterized
by reaching out beyond the boundaries of the photographic medium, contemporary drawing,
installation, photo animation and video. In her art practice she is often playing on a
psychological string, creating scenes and atmospheres in which absurdity, uncertainty, sinister
uneasiness and humor are subtly intertwined.
During the residency Andrea will work on her ongoing portraits project “In-divi-dual-i-ty” based
on capturing specific atmosphere of environment and people living in different inspirational
places she visits.
The starting point for me was the intercultural dialogue, an attempt to try the borders of tolerance
and diversity not only within various countries, ethnicities and cultures, but also within the frame
of subtler nuances of human otherness and communication. My long term goal is to capture,
examine and implement the idea of otherness as of something unique, acknowledging its socio-
political importance for this globalized society so marked by instability and crumbling of the old
structures and mechanisms.
A part of this project is socio-political as well a psychological reflection of an individual in a
society within the Central European context and outside its borders. Any era suffering from an
outward instability stresses the need to deepen and redefine the inward integrity of an individual,
to try and find a fixed point in the fluid environment. This interaction of micro- and
macrocosmos then further influences the universe around us. We redefine the boundaries and ask
the question about our own power to change the flow of history; we think of the movement of
butterfly wings and apply the theory of chaos in practice. “Sensitivity to initial conditions means
that two trajectories will diverge exponentially with time.” The aim of my project is to reflect the
actual state of our society – the instability – as well as the attempt at (not) finding the fixed
points in era characterized as “late radicalized modernity” (Giddens), “risk society” (Beck), or,
most famously,“liquid modernity”(Bauman).